Wellington is an innovative small city. However, as with many other cities, transportation remains an issue. Amsterdam however, appears to have it somewhat sorted. With diverse options 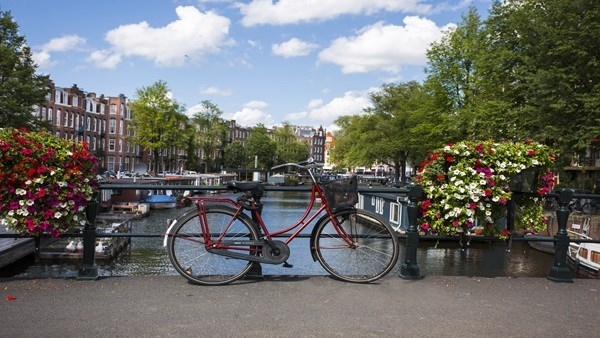 for travel that cater to locals, travellers, businessmen, students and retired alike, Amsterdam is made easy to navigate by foot, peddle, paddle, drive or sail. The OV chip card allows for unlimited transportation by train, tram, metro, bus and ferry.

However, even more impressive, is Amsterdam's peddle power, with a reported 38% of travel within the city relying on bicycle. There are over 800,000 bikes in the city according to ‘I amsterdam’, that is more bikes than people!  Biking is considered an essential for gaining the authentic Amsterdam experience and is thoroughly entrenched in the culture of the city. Cycling predates many other transportation systems but has remained in vouge in this metropolitan city.

Though Amsterdam is decidedly smaller than Wellington on landmass, its canals and extensive water area add to the city’s character and charm. Water travel allows for intimate navigation of the city with ferry and canal boat cruisers catered to the commuter or the intrepid adventurer. Many of the city’s most impressive architectural landmarks are best viewed from the water. The Canal’s are hugely impressive and have been meticulously maintained to ensure the longevity if the cities biggest (arguably) asset.

In 2012, Amsterdam was ranked the second best city in which to live by the Economist Intelligence Unit (EIU). Factors considered include; green space, connectivity, isolation and pollution. At the same time, Wellington sat 23rd on the list.

Wellington shares many attributes with Amsterdam in regards to culture and innovation and the ability to get around easily. I don’t see the council opening the flood gates and allowing canals to develop through Lambton Quay or Cuba Street any time soon, but perhaps bicycles and electric bicycles (for those Wellington hills) will be our main mode of transport going forward? And of course there is always the conversation to be had about light rail.

Regardless, there are many factors that make these small cities desirable. Next time you notice something great about Wellington, stop and enjoy it. 23 out of 140 ain’t bad.